They say that you are defined, at least in part, by the place where you grew up. The older I get and the more I observe people, the more this seems true. It took me until a decade ago to realize that I really am a “suburban” kid and am used to suburban conveniences There is also no denying how living close to wetlands on Long Island all my life has influenced me to a huge extent. My husband who grew up in the South Bronx still sports a Bronx accent and resorts to such phrases as a “sliding pond” whenever he talks about city life. Although he is perceived by most to be very quiet and nonconfrontational, just below the surface is a seething secret identity raging against those who would dare to invade his territory. Nonetheless, he is completely at home in the city.

In any case, these thoughts have been on my mind this summer since I began reading the four-volume Neapolitan Novels: Elena Ferrante’s fictional memoir of growing up in postwar (WWII) Naples. Elena, the narrator (Elena Ferrante is a pseudonym), fights tooth and nail to build a personal and professional life that will get her off the “mean streets” of Naples in the 50’s, only to realize that no matter where she goes, Naples goes with her.

Adding to the intrigue is the second, equally important character who is also her best friend since primary school: Lina. Set against the backdrop of family rivalries, executions, limited opportunities both socially and economically, their friendship thrives for a while as the two girls bond to transcend their surroundings. However, as one goes off to high school and the other doesn’t, the plot thickens. There is an ongoing love/hate relationship between them from that point on that threatens to explode at any given moment…and there are many such moments.

Talk about a good summer read! Since the first page of the first novel I have been immersed in the sights and sounds of Naples, a place I knew nothing about, as well as the neighborhood people who lived there during the several decades following WWII when this story takes place. The rivalry between the two friends is riveting and takes so many twists and turns that the outcome is impossible to predict, making it a real page turner.

My son, who is well traveled and has been to Naples, told me that I should one day go there. He said, “Naples is the real Italy and it’s rough but not to be missed.” I am probably about 100 pages from the completion of the four novels and I still have no idea how things will turn out for these two lifelong friends. I do know, however, that Naples is their shared destiny…for better or worse. And, of course, that I am now destined to visit Naples. 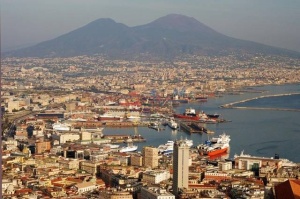