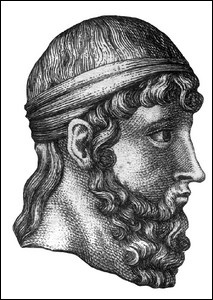 Plato is one of the world’s best known and most widely read and studied philosophers. He was the student of Socrates and the teacher of Aristotle, and he wrote in the middle of the fourth century B.C.E. in ancient Greece. Though influenced primarily by Socrates, to the extent that Socrates is usually the main character in many of Plato’s writings, he was also influenced by Heraclitus, Parmenides, and the Pythagoreans.
Internet Encyclopedia of Philosophy

Some of my most relaxing moments during the summertime are when I am in my pool. The pool is very old (probably over 40 years) but very functional. It is surrounded by trees on three sides, including some very tall pine trees and a giant sycamore in my neighbor’s yard that dumps leaves and bark into the pool on a daily basis 🙂 It’s so private it feels like a sanctuary and promotes feelings of peacefulness and reflection.

As I floated around the pool on my inflatable raft, I thought about my destination for tonight: the Great Books Club at my local library. I have been a member for about a year now and look forward to our monthly gatherings. We read selections of Great Works and tonight’s selections is Meno by Plato in which Socrates and Meno discuss whether or not “virtue” can be taught.

When I was in college I took a philosophy course (don’t ask me why), and although I was intrigued by the idea of it, I didn’t enjoy it very much and remember practically nothing about it. It didn’t help, I think, that the professor didn’t provide much of a context for the philosophers we read, so I still don’t have a very good sense of the chronology of philosophical thought.

After reading tonight’s selection, I am reminded of how much I dislike the study of Philosophy. I am hopeful that my very wise and witty Great Books members will offer some insights that will help me better understand and appreciate this very dry and very structured piece of writing. I always felt that if I didn’t get the “premise” being proposed by Socrates, I couldn’t follow his logic and believe in the outcome. Instead, I always felt “bullied” by his very structured, directive “dialogues.”

As a retired senior this may well be my last fling with Philosophy, so I am hoping for the best. My own philosophy for literature (and almost everything else in life) is to remain open to the possibilities of something new and/or different, unless I feel it will do me harm. However, I also no longer waste much time on anything that doesn’t feel pleasurable to me. I feel this more than ever now that my time on earth is no longer infinite….

Do you ever feel the same way? I’ll let you know what happens! Meanwhile, here’s a quote from Plato to ponder in this season of political chaos:

17 thoughts on “Contemplating Plato in the Pool”