After wandering around Madrid for almost two days, we were finally ready to visit the Big Kahuna: El Museo del Prado. For decades I have read about this museum and its important collections. I guess, for me, it is the equivalent of someone visiting The Metropolitan Museum of Art in NYC for the first time. I was eager to check this off my life list of things I want to do.

My husband and I were able to walk to the Prado, only ten minutes from our hotel. As we approached, I was surprised by its appearance: very stately, but not, to my mind at least, as impressive as the Met. When we found the entrance, I was even less impressed as it has been renovated to include a modern facade that hides the actual building from view.

Its new entrance is a less interesting entrance than the modified entrance to the Louvre, for example, which at least has the novel I.M. Pei pyramid entrance…not to everyone’s liking, but certainly memorable.

I was on a mission to see the most notable Spanish painters: Velaquez, Goya and El Greco. I did not include Dali or Picasso, since I have seen many of their paintings in other museums and I am limited in my ability to stand for long periods of time. Time was of the essence! So I dragged my husband to those parts of the Prado featuring the above-mentioned artists. I will share a line or two about each of the three painters, lifted from my guidebook (Lonely Planet).

Diego Rodriquez de Silva y Velazquez (1599-1660) painted large portrait and full body canvases of royal personages, “and every one of them seems to glower down from the walls, at once compelling and vivid and always filled with personality and life.” Somehow, we managed to overlook his most famous painting, Las Meninas, completed in 1656. “It is more properly knowns as La Familia de Felipe IV (The Family of Felipe IV) and the painter’s mastery of light and colour is extraordinary.” A testimony to the results of too much inbreeding, it is certainly one of the oddest paintings I have never seen in person!

Although I found Velazquez’s portraits imposing, I cannot say I loved them. For me they lack the warmth of, say, a Rembrandt portrait. But as a court painter he was highly regarded.

Our second painter, Francisco Jose de Goya y Lucientes 91746-1828) “is the other towering figure of the Prado, with painting that chart the easily scandalised, tortured Spanish soul of the early 19th century. His work is represented by two dramatically different subjects: two of them, La Maja Vestida 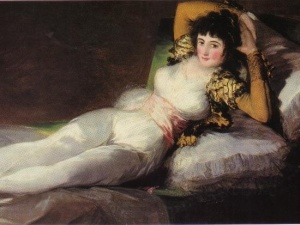 “tell of Goya’s rumoured (and scandalous) love affair with the Duquesa de Alaba; while two others, El Dos de Mayo and El Tres de Mayo, “bring to life the 1808 anti-French revolt and subsequent execution of insurgents in Madrid.” While I hardly found La Maja Desnuda scandalous, jaded as I am by having seen so many paintings of nudes, I favored those two, probably because there is an element of the actual personality of the subject in each of them, compared with the more generic war tableaux.

Doménikos Theotokópoulos (Greek: Δομήνικος Θεοτοκόπουλος [ðoˈminikos θeotoˈkopulos]; 1541 – 7 April 1614), most widely known as El Greco, was a painter, sculptor and architect of the Spanish Renaissance (Wikipedia). El Greco is perhaps my favorite of the three, though the least represented in the museum. I love his distortions of both figures and landscapes. They remind me somewhat of Chagall’s painting. El Greco is probably best known for his painting Vista de Toledo.

We actually considered a day-trip to Toledo which was close by, but we didn’t have enough time. At this point in my life, my motto is “less is more.” I can no longer do everything, nor rush around to do so. So I try to slow down my pace and savor what I actually get to do and see. (Not that I wouldn’t have enjoyed that trip to Toledo, mind you!)

After several hours of wandering through the Prado, my husband and I were both experiencing museum fatigue, so we concluded our visit. I realized that Spanish painters are not my first love; I prefer the Impressionists and their softer versions of humanity. But I did learn that these artists often depended on support from the royals for their livelihood, which resulted in many of the rather rigid portraiture on the walls of the Prado.

We were ready for a break and found a sweet, little outdoor cafe adjacent to the Prado. We sat there for a while, my husband enjoying his cafe con leche, while I sipped my cooling herbal iced tea. We watched the parade of visitors, enjoyed the shade and participated in our favorite pasttime in Spain: cafe life. 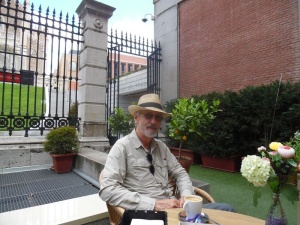 As we we left the Prado, we found a bluff above the museum from which I could take some better pictures. At one point, I had to back up a few steps to get a more inclusive viewpoint of the museum but suddenly found myself losing my footing and abruptly falling. I leaned to the left to try to break the fall, and ended up jamming my left shoulder, hurting my elbow and jamming my left knee. I sat there stunned while several passersby stopped to ask if I was ok. Surprisingly, I was, although in a bit of a stupor from falling. I took a few minutes to recover, then we walked back to our hotel to apply ice and so I could rest a bit. (It took a few weeks, but the pain is finally gone. I am so lucky I didn’t break anything.)

Our final day in Madrid concluded with a visit to a third restaurant, Vino Techa Bistrot on, you guessed it, Calle Moratin. When I first saw it the day before, I knew it was special, but I had no idea it was one of Madrid’s most popular restaurants.

This was a more typical fashionable restaurant than the previous two I described in earlier posts which were a neighborhood hangout for bullfighting enthusiasts and a trendy place with a sunny decor. This restaurant offered straight on, well prepared Spanish fare with a sizzling wine list.

“I’m not quite sure why, but Marcos Gil (the owner and host) creates an ambiance you want to return to over and over again. For as long as you sit there you feel beau and chic. The restaurant for me is a kind of installation representing the sort of life one aspires to, which you want to try to lead every day. The wines, from Spain and France, have been chosen as carefully as the food, none of them break the bank and all of them are served with just the right amount of savoir-faire. It is also a place where one can talk and where you are left alone to do so. I cannot recommend it highly enough. It is an absolute delight.”

Everything the critic said is true. The owner discussed the menu with us, giving us a detailed description of every dish that interested us. The roasted chicken dish, which my husband chose, came highly recommended by two Americans from Colorado who struck up a conversation with us. I chose, instead, the “fish of the day” which was boned mackerel on a bed of sweet red peppers…a local specialty which was quite good.

The appetizers were outstanding: the best potatoes I’ve ever tasted, roasted in olive oil and seasoned with a special paprika from the northern part of Spain. The artichoke hearts were marinated in olive oil and seasoned with salt and a very finely ground bacon. The third appetizer was porcini mushrooms, marinated, sitting on a bed of seasoned cream. These mushrooms were aged for several months in a vacuum container to mellow their taste. They were amazing! For dessert we had a liquid creme brulee and the best chocolate cake with a liquid cherry center. Muy delicioso!

We finished the evening with a nightcap served by a friendly, very young waiter we had met two nights earlier at a small bar/cafe we found in the cozy Plaza de Mutate (Barrio de las Letras)

As we relaxed and enjoyed the warm night air and the low-key vibe of the plaza, we felt, for a few moments, almost like true Madrilenos.

Next week: South to Sevilla!

12 thoughts on “A world-class museum and dinner on our final day in Madrid!”