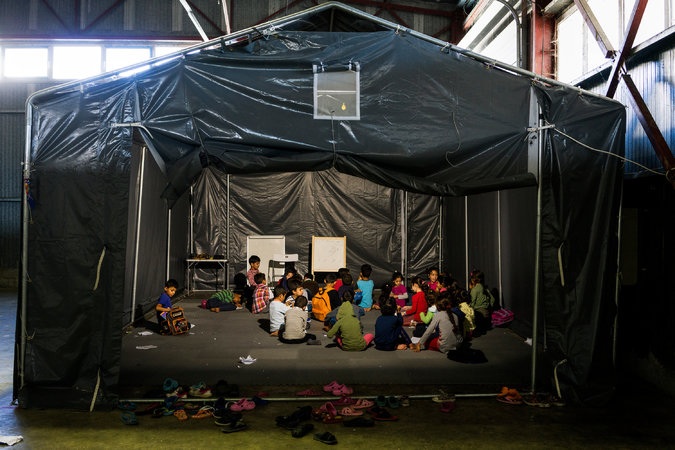 (This picture in the NY Times, Monday, September 26, shows migrant children being taught at the disused tobacco factory that serves as the Oraiokastro refugee camp in northern Greece. )

I get it. Most people living reasonably comfortable lives don’t want to rock the boat. I include myself. And many people are fiercely protective of their families and children which is usually a good thing. But today I read a story that made me sad and shook me out of my complacency.

The story in today’s New York Times, “Migrants in Their Schools? No Way, Some Greeks Say,” is about the Syrian children housed in makeshift refugee camps in northern Greece who were recently told they could attend the local schools, only to be rejected shortly thereafter by groups of parents fearful of outbreaks of contagious diseases and disruption of their way of life.

It is a very painful situation. As a former English as a Second Language teacher, I taught many immigrant students in my classroom over the course of 22 years mostly from Central and South America and southeastern Asia. I have witnessed firsthand the fear and anxiety of the new students who don’t speak the native language of their new country and many who may never have attended school. Their challenge, to adapt and learn to fit in and succeed academically, is almost insurmountable. Some thrive if they are lucky enough to have a supportive, intact family. Many others fall in with the wrong crowd by middle school and drop out by high school. Others struggle and barely manage to graduate.

My primary job was to teach English to the new immigrants, while simultaneously exposing them to the mainstream curriculum (since the arrival of the Common Core mandates). My other (unspoken) role was to help these students and their parents negotiate their entry years in the school system. I have walked the walk…and I can tell you it is very difficult. But the reason I became an ESL teacher is because I know that the best outcome for the children of immigrants is to become educated and fully participant in their new culture.  Without education there would be no assimilation. Kids want to belong.

The flip side of this story is that these children have nowhere else to go. It was not their decision to migrate to Europe and they are stuck in limbo until they are accepted, or until their parents move on either by choice or by expulsion.  In the meanwhile, the conditions they are living in are unsanitary and certainly not conducive to affording the children any kind of security or sense of well being.  None of them are attending local schools.

I do understand the health concerns of the local parents; I would have the same concerns.  And I do understand the fear of the local people who are afraid the newcomers will introduce values and practices that are alien to their own. But what I learned in the 22 plus years I was an ESL teacher is that first and foremost, children just want to be with other children. The natural forces of wanting to fit in and be accepted are very powerful and will speed up the integration of these children into the local culture.  Their parents want the best for their children, so they, too, will begin to conform to local customs, but probably more slowly. It will take time, but things will sort themselves out.

Eventually, everyone will have to compromise a bit.  The local people will feel less anxious when their health concerns are addressed.  The immigrant children will begin to learn the new language and bring home what they learn to their parents. The parents will feel more at ease when they feel more accepted.  There will be changes in the small villages that accommodate the newcomers; some of those changes will be unwelcome, but others will expand the outlook of the local inhabitants.  Some of the immigrant families will move on; others will stay.  Some, like the 9-year old girl, Mariya, who is featured in the article and wants to attend school in the nearby village, may be given the opportunity to  pursue their dreams: in her case, to become a lawyer “helping people.” That is, unless her parents decide to move on to Germany, or return to Syria. Or unless the villagers reject her.  Then…what will become of Mariya?

10 thoughts on “What Happens When Kids Can’t Go to School?”