An ecotone is a transition area between two biomes. It is where two communities meet and integrate. It may be narrow or wide, and it may be local (the zone between a field and forest) or regional (the transition between forest and grassland ecosystems). Wikipedia
(Full disclosure: I learned the word “ecotone” while watching reruns of the incredible HBO series, Six Feet Under. I am fascinated with the word.)

April showers bring May flowers.  So on Sunday, in between the showers while waiting for the flowers, my daughter and I decided to take a nature walk in one of our favorite places: the ecotone of a wetland shoreline meeting a much traveled road. It was a bit chilly, but the skies were clear and we both needed to get some exercise. As we drove past a nearby harbor at the outset of our journey, we noticed that it was high tide.  I wondered if that would mean the the wild birds I so love would be active in the wetlands. 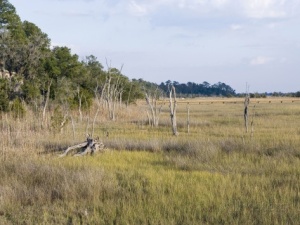 We pulled into our usual spot in the parking lot of a bathing club where there were signs prohibiting parking.  We’ve done it for years off-season; today was no exception.  As I was stepping out of the car, I immediately heard the distinct sound of an osprey very close by.  I looked over toward the marsh across the road from the parking lot, and sure enough….  Just across the road from where we parked, high on a  platform placed atop a telephone pole, was an osprey sitting above its nest, squeeking its high-pitched warnings to us not to get any closer.

We were the perfect example of humans encroaching upon a natural habitat; a confrontation within an ecotone which has become a common occurrence here on earth. Did you read the recent story about the unfortunate lion in Kenya, Mohawk,who ventured beyond his usual boundaries, only to be shot to death by park rangers who were supposed to be protecting it? Due to human encroachment, lions may soon no longer exist.

Despite the warning sounds from the nest above, we left the parking lot and stepped onto the path near the nest, eager to see what we could see.  A couple of weeks ago we were on the same walk when we spotted several ospreys circling over the marsh hunting for fish; the platform nests were not yet inhabited. It was great to have them back and I knew it would not be long before the nests were filled with this year’s offspring.  Today we hit the jackpot. 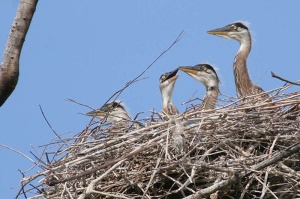 All three osprey nests along our path were occupied by pairs of ospreys. One osprey (presumably the female) stayed on each nest, while the partners (presumably the males) flew back and forth, hunting and guarding the nests.  There were even other ospreys sitting in the marsh grass like they hadn’t a care in the world and were just enjoying this clear, breezy early Spring day.

In many years of osprey observing, I have never seen so many at one time, and never have I seen them sit still anywhere for very long.

As we continued our walk along the ecotone pathway, we noticed a vary large egret off in the distance. 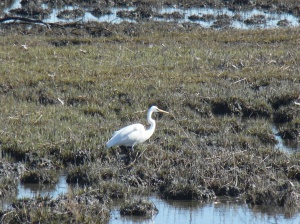 We stopped to observe it through our binoculars, but as soon as it saw us, the egret lifted its wings, spread them very wide, and flew off across the marsh.  But there were others.  My daughter and I observed one pair in particular, very focused on fishing in the inlets that run through the marsh, striking those gorgeous poses, captured in so many Chinese paintings, that are so particular to egrets.

Then I spotted it!  While sweeping the far shore of the marsh with the binoculars, I noticed the outline of a Great Blue Heron standing there very quietly and majestically.  If I were not familiar with the shape and size and outline of this bird I might have missed it altogether.  But there it was; my favorite of all the wetland birds. Although I watched it intently for about five minutes, it did not move at all. My bird-watching was now complete. 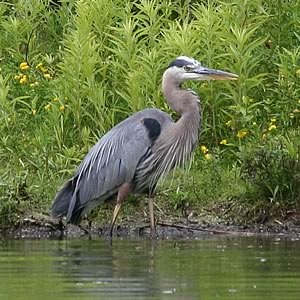 We reached the end of the path after about a mile and came upon a gorgeous bunch of forsythia bushes at the edge of someone’s property.  The bushes provided the border for a luscious sweep of grass that went up a steep hill, dotted with miniature yellow daisy-like blossoms. It was so inviting I felt a real urge to trespass and walk up that hill, but didn’t. 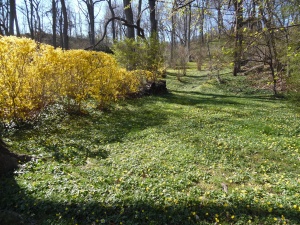 We did an about-face and returned along the same path, seeing more egrets fishing, some bufflehead ducks bobbing in the waves on the LI Sound across from the marsh, and, of course, the osprey parents still hunting, circling overhead and sitting astride their nests squeaking. My three favorite shorebirds in one day: a triple header!

I wondered how much longer this ecotone would last given the rate at which the oceans, and consequently the marshlands and its denizens are being polluted.

For now, I feel blessed to be able to enjoy its many riches, but I still feel sad about the lion and our future.